Menu
When I was traveling around Canada over the summer, I liked to prod friends I hadn’t seen in a while with an announcement. “The thing you need to know about me now,” I’d say, “is that I make my own deodorant.” No one was excited by my joke, which was only told half in jest. I really had made my own during one of Natalya Konforti’s chemical-free deodorant-making workshops at Alserkal Avenue’s Kave in June and...

When I was traveling around Canada over the summer, I liked to prod friends I hadn’t seen in a while with an announcement. “The thing you need to know about me now,” I’d say, “is that I make my own deodorant.”

No one was excited by my joke, which was only told half in jest. I really had made my own during one of Natalya Konforti’s chemical-free deodorant-making workshops at Alserkal Avenue’s Kave in June and I was using it daily and completely sold on how well it worked. I found the mix of ingredients better than any natural deodorant I’ve tried and more effective at absorption and odor control than most commercial deodorants and antiperspirants, too. (Caveat: Of course, everything is made up of chemicals. So by “chemical,” what I mean are the non-naturally derived, industrially-produced varieties.)

I was prepared for the eye-rolling response: after all, it wasn’t that long ago that I gave little thought to what chemicals I was using on my body in personal care products – and I would have scoffed at those who did.

The change started with cutting out talcum powder, which I had loved and used liberally from childhood and well into my thirties, until I started hearing murmurs about asbestos-contaminated talc. (Those multi-million and -billion dollar payouts which the courts in the United States are forcing Johnson & Johnson to pay to people who say they developed ovarian cancer after using their powder have really hit home this year.)

Then it was face washes and lotions, toothpaste and more recently, deodorant and antiperspirant.

You don’t have to take a deep dive into the world of science to conclude that it might be a good idea to steer clear of some of the known endocrine disruptors that appear on the ingredient list of some of the big brands selling these products. According to the US Institute of Environmental Health Sciences, endocrine disruptors are chemicals that may produce adverse effects by interfering with the body’s developmental, reproductive, neurological and immune systems. And as we learned recently with sunscreen, the US Food & Drug Administration doesn’t always have all the information when it comes to the toxicology of chemicals in the products it approves.

Among the endocrine disruptors used in deodorant and antiperspirant are pthalates, triclosan and parabens.  Aluminum, which is used in antiperspirant to temporarily block sweat, and the chemicals used in fragrance are among the other ingredients which prompt concern .

Dr Nasr Al-Jafari, medical director at DNA Health, a functional health and wellness clinic in Dubai and member of the livehealthy.ae expert panel, does have the information, however. And he uses a mineral-based deodorant called Bionsen, which is aluminum and paraben-free.

“The lymph nodes in our underarms play a big role in our body’s immune system, and so the worry is that the chemicals absorbed through our skin may affect the 20 nodes in this area,” she explains. “Though there hasn’t been enough research yet to confirm causality between chemicals such as aluminum compounds and health issues like breast cancer, when there is a natural alternative that works, I personally prefer to lean in that direction.”

And while chemical-free deodorant used to be something associated with the hippy-ish fringe, the mainstream is increasingly leaning toward it, too. According to market research released this year by Technavio, the global organic deodorant market is expected to post a 12 percent compound annual growth rate between 2019 and 2023.

Among the celebrities who have talked about making the switch are model Ashley Graham, singer-turned-motivational speaker Alicia Keys and Justin Bieber, who earlier this year announced his collaboration with Schmidt’s Naturals on a  line of vegan deodorant called Here + Now.

For me, making the switch to natural deodorant has been a long journey, one which involved trial and mostly error. I’ve probably tried at least 10 different varieties of non-toxic deodorant and come up short on each one, wasting money and time.

When I heard Howard Stern, a veteran SiriuxXM radio host in the United States worth literally millions and with every resource at his fingertips, say he couldn’t find one (“They never work,” he concluded), I gave up too.

Then earlier this year I ran into Amanda Mattar, an American mother-of-two, yoga teacher and one-half of Clove Essentials (she’s also vegan and a doula and runs Wholly Mama Lifestyle). She gave me a sample of their new all-natural organic deodorant, made in Abu Dhabi.

I was floored. This simple product – one of several the company has released, including body lotion and a minty lip balm – worked better than all the other ones I tried, including those containing chemicals. One application and I was free and clear all day, even during sweaty workouts, even in the UAE summer heat. 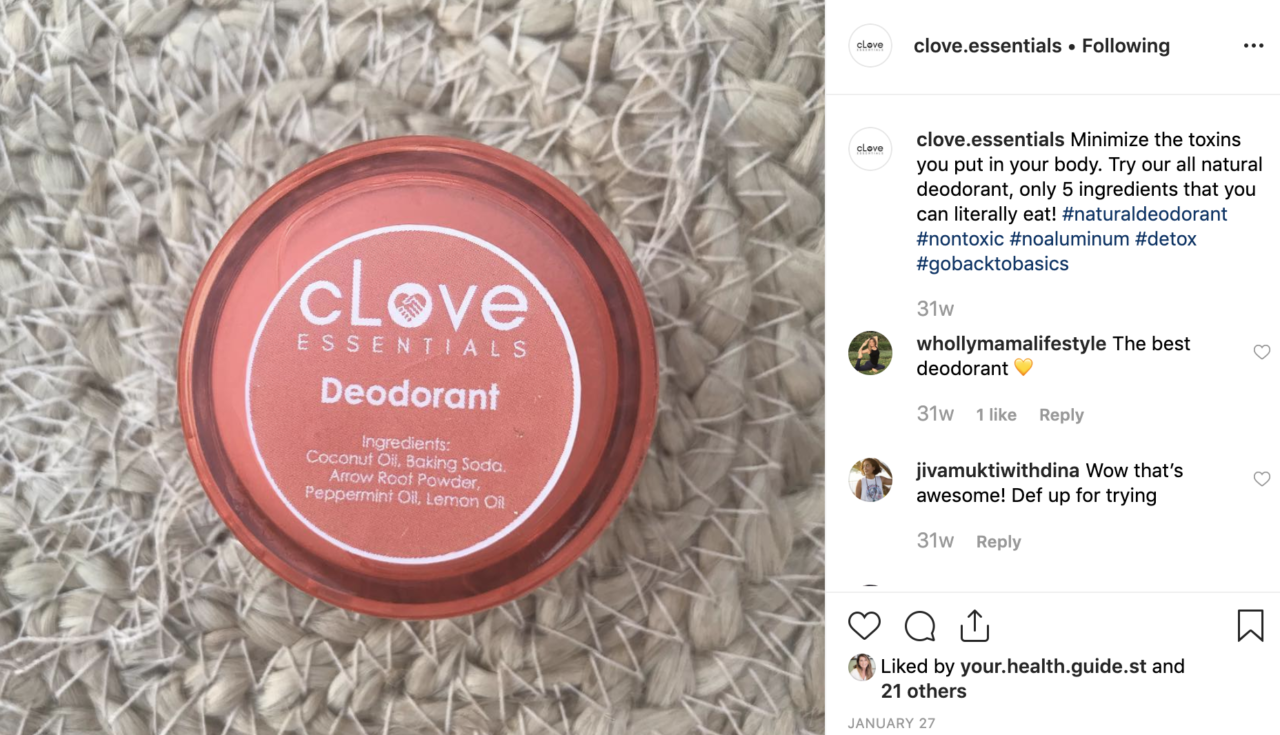 Clove Essentials deodorant – sold with their other products at markets and at The Studio in Abu Dhabi – is a mix of coconut oil, baking soda, arrowroot powder and essential oils, including peppermint and lemon.

It comes in a little pot, just like the version I made in the workshop, and needs to be applied with the fingertips. This is a stumbling block for many people and would have previously been unthinkable to me too, before my conversation with Mattar.

My new affinity for the natural stuff led me to Konforti’s workshop, where I joined half a dozen other ladies for a relaxing hour mixing together melted beeswax and shea butter, baking soda and arrowroot powder. Once you have all the ingredients, Konforti says it takes her just 15 to 20 minutes to make a six-month supply for two. It’s important to note that sometimes I have found my skin getting irritated with the switch to natural deodorant, but not all the time. Konforti advises that baking soda is usually the culprit in these cases and advises me to switch the recipe to swap in bentonite clay, and that did the trick. All of ingredients are available for delivery locally, too.

Am I reducing the likelihood of my getting some kind of cancer because I’ve made this extra effort? No idea, but at least I’m trying.

Mattar, who is vegan, believes strongly that doing whatever we can to reduce our toxic load and bolster our health can go a long way toward improving our chances against rising rates of illness and diseases like cancer.

“By going plant-based and doing yoga and using products that are not toxic,” she says, “your chances are less likely than if you are eating a high animal protein diet and lots of crap and not de-stressing or detoxing.”

Getting creative in Dubai with Theta Healing

Here's how to make your own chemical-free deodorant