Menu
This story by Olivia Boyd originally appeared on Huffington Post and is republished here as part of Covering Climate Now, a global journalism collaboration committed to strengthening coverage of the climate story.       In college, Eben Bayer grew mushrooms under his dorm room bed. The mechanical engineering student, who had grown up on a farm in the US state of Vermont, was convinced the fungus was one of nature’s most effective “technologies” and... 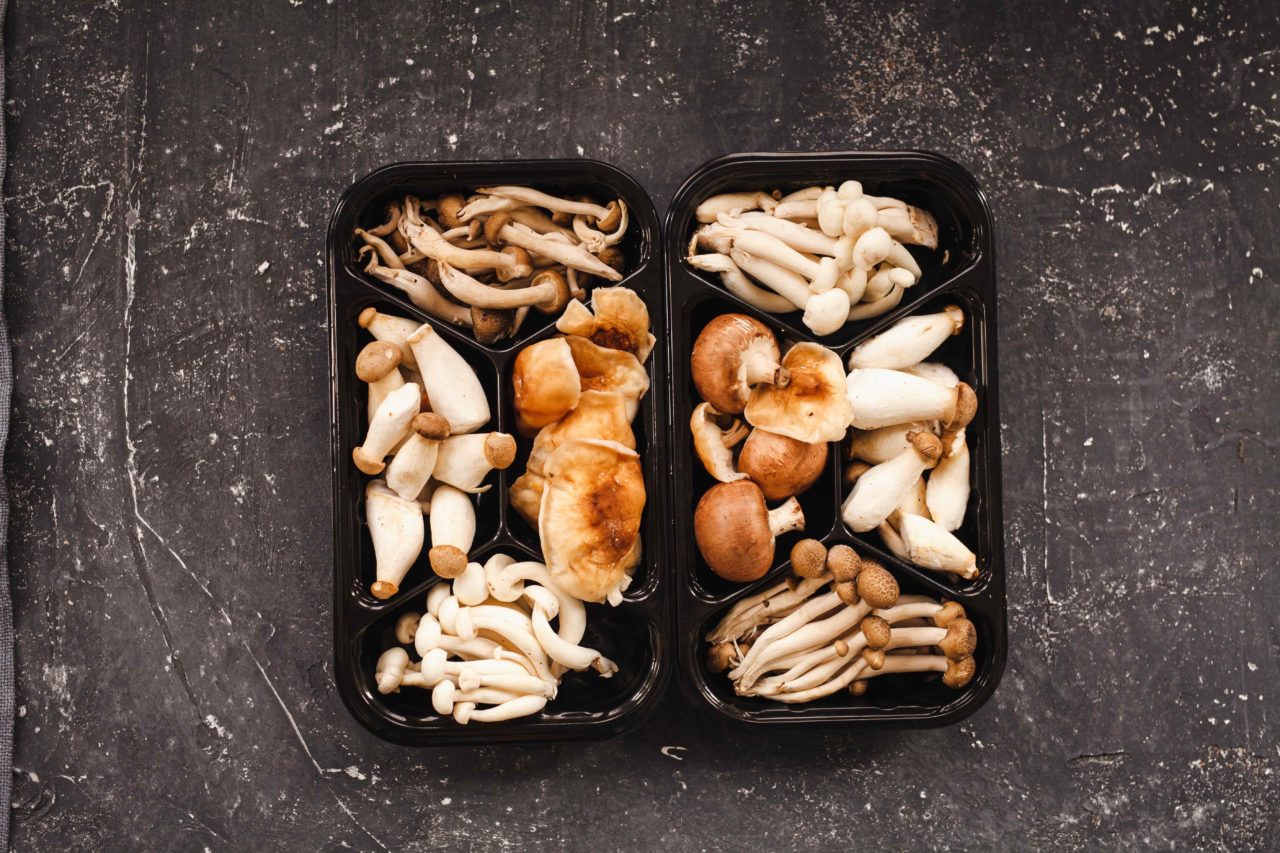 This story by Olivia Boyd originally appeared on Huffington Post and is republished here as part of Covering Climate Now, a global journalism collaboration committed to strengthening coverage of the climate story.

In college, Eben Bayer grew mushrooms under his dorm room bed. The mechanical engineering student, who had grown up on a farm in the US state of Vermont, was convinced the fungus was one of nature’s most effective “technologies” and could be used to overhaul the way we make a range of everyday products.

Thirteen years later, his New York-based company Ecovative Design produces more than a million pounds in weight per year of its compostable, mushroom-based alternative to Styrofoam. And Bayer is turning his mind to the next product on his list: fake meat.

Bayer believes mycelium – the network of tissue that makes up the body of many fungi, a broad category that includes mushrooms – could be a great, eco-friendly meat alternative. The fermented slabs can even be cut thin enough to make a “very compelling bacon.”

“We could do a thousand and one things with mycelium,” he said.

Bayer is not alone in his belief in the magical power of mushrooms. Much of their appeal comes from the variety of potential solutions they seem to offer to our many environmental problems.

There are a slew of startups touting fungi as an environmental game-changer, able to make the construction industry greener, replace animal products in our food and clothes and even clean up pollution and eat through waste. They say mycelium’s unique structure and chemical properties, combined with the fact that mushrooms are easy to grow, are found all over the world and consume almost anything, makes  it the ideal building block for a wide range of applications. NASA is even thinking about building homes from fungus on Mars.

But while the buzz around fungus is getting louder, its impact on the ground is still relatively hard to spot. Mushroom-based leather, for example, has drawn attention as an alternative to animal skins, but is still limited to a tiny range of designers. And while mushroom-based materials like the ones produced by Ecovative have been talked up as a replacement for plastic for a decade, global plastic production is still booming – or at least it was before the pandemic.

Peter McCoy, the author of Radical Mycology: A Treatise on Seeing and Working with Fungi, finds it strange that fungi have taken so long to gain attention given their status in nature. As they are neither plants nor bacteria nor animals, they can do certain things in the environment that none of those groups can do, says McCoy, who is also the founder of a grassroots group working to spread awareness about the fungi field.

One unique function is that their threadlike tissue grows fast and in tight networks, lending itself to light and strong material suitable for a range of purposes. But perhaps even more important, said McCoy, is that they produce a cocktail of chemicals when digesting food or protecting themselves.

“That chemical soup – which will vary by species or even according to the environment they’re in –  leads to a whole range of compounds that we don’t find anywhere else in the natural world,” said McCoy, pointing to penicillin as an example of the powerful substances they generate. “Fungi are nature’s greatest chemists,” he said.

Deepening insights into these powers, combined with technological advances ― particularly in genetics ― have led to an explosion of interest in how to apply fungi’s “chemical mastery” to human systems, said McCoy. That encompasses products we might use, for example, to package goods, build houses and feed ourselves and also processes that can help clean up our world – for example by breaking down environmental toxins and consuming plastic.

“For the first time in human history, we understand and can work with these organisms to greater degrees than has ever been possible,” he said.

Ehab Sayed, the founder of UK-based biotech startup Biohm, shares that view. Scientists in the company’s London lab work to develop new strains of fungi by exposing batches to stimuli including differing light or humidity levels. In this process, known as directed evolution, the fungi rapidly evolve, for instance creating new enzymes, said Sayed. And when these adaptations look like they’ll be useful to humans in some way, the team clones the fungi and develops them further.

One product to come out of this process is a mushroom-based building insulation, made by feeding waste to mycelium. The company plans to launch it commercially this summer as an eco-friendly alternative to synthetic insulation materials, which Biohm says are carbon-intensive to manufacture, hard to recycle and pose a risk to health by emitting volatile organic compounds into buildings.

Biohm’s insulation will be expensive when it launches ― at around US$30 (Dh117) per square meter, compared to an industry average of around $15. But the material will be cost-effective, according to Sayed, since its thermal conductivity is lower than conventional insulation, meaning less is needed to achieve the same result.

The company also expects the price to fall quickly as it scales. Biohm is turning an old paper mill in southwest England into a vertical mushroom farm and plans to expand to the Netherlands and Portugal next year.

Working with mushrooms has key commercial advantages, said Sayed, most obviously their ability to thrive on waste. Raw materials are usually a manufacturer’s main expense, but Biohm grows its mushrooms using other companies’ by-products, such as timber shavings and grass clippings, which it is paid to collect, creating a “double revenue stream.”

Yet despite such selling points, making a success of fungal products in the real world is not always straightforward. In 2016, furniture giant IKEA announced plans to replace plastic foam with Ecovative’s mushroom packaging to great fanfare, but has since quietly dropped the scheme.  In an email to HuffPost, the retailer said “it was not possible to scale production to make it viable at industry level.”.

Part of the challenge, said Bayer, is to focus on areas where mushroom-based products can add value and be cost competitive, rather than trying to use them for everything. Attempting to displace throwaway plastic-foam cups, which are mass-produced on an epic scale and value-engineered to be extremely cheap, is a nonstarter, for example. “It’s a horrible application for our technology. [It’s] never going to be competitive. So someone else has to solve the cup problem,” he said.

But even when they believe they have the right solution, some startups have found a lack of appetite for investing in new products and processes in incumbent industries.

LifeCykel is an Australian company that started out growing gourmet mushrooms off waste coffee grounds collected from local cafes. They have since expanded into the health field, with a range of mushroom extracts that claim to boost immunity. Customers include elite athletes and bee farmers, who feed the extract directly to their bees.

Company founder Julian Mitchell believes LifeCykel could also help tackle the problem of waste in the fashion industry. In small-scale trials, he said, the team has successfully used mushrooms to break down discarded clothing. But Mitchell said that scaling this to the point where it could have an impact would need much greater investment from clothing companies – as well as commitment to solving their waste problem – than is currently evident. “It comes down always to capital investment and are those companies prepared to invest in that or are they happy just to send it off to landfill?”

Udeme John Dickson, an environmental scientist at Nottingham Trent University in the UK, has observed a similar challenge in the area of mycoremediation, or the use of fungi to break down pollution in soil or other environments. The idea that the all-consuming hunger of fungi can be harnessed to clean up waste that is already polluting land and waterways has excited scientists for decades. But Dickson says the remediation industry has so far failed to invest in refining the method to the point where it can be widely commercialized.

Both Mitchell and Dickson would like to see higher levels of government intervention to incentivize corporate investment in fungi-based approaches, including higher taxes on dumping waste in landfill.

But others believe a more radical restructuring of our global manufacturing industry – one that takes power away from big companies – may be required to create a world where mushroom-based products flourish.

Rather than “locking down” knowledge and production in the hands of a few companies, it would be much better to have a global network of local producers, sharing recipes and making materials from locally abundant resources, said Alysia Garmulewicz, a professor of the circular economy at Chile’s University of Santiago Garmulewicz, who is also co-director of Materiom, a platform providing open data on materials made from renewable resources, said this would accelerate the spread and use of more sustainable approaches.

“I think that’s a mindset shift that needs to happen. Rather than thinking, this is going to be the next thing that takes us to a huge scale commercially, and we’ll create this massive plant that’s going to produce it for everybody, we need to think about disseminating the knowledge so that people in many locations can start making it,” she said.

It’s a massive leap from where we are today, but the approach of some startups suggests they are beginning to think along these lines. Rather than setting up its own production facilities overseas, Ecovative, for example, is training others and licensing them to produce mushroom packaging themselves.

“Ecovative isn’t a company that can go set up a factory in France and hire French packaging salespeople. We don’t understand the culture, we don’t understand the distribution, the supply chain, the language,” said Bayer. “So what we’re seeing is smaller, entrepreneurial packaging companies who come to us and are setting up those sites. I feel like we’re on the cusp of an explosion of this.”

Meanwhile, McCoy believes communities can start getting benefits from fungi without waiting for the market to develop fully. Grassroots groups, for example, could get together and work out how best to use mushrooms to clean up local pollution spots. He has started an online mycology school to help boost public awareness and bring fungi in from the fringe.

The more we talk about fungus and normalize it, the better, said McCoy. “We need to keep saying, ‘Hey there, fungi are critical to the environment, they’re fascinating historically and culturally. They’re not weird’.”

Let your kids get bored this summer - it's good for them

How sound healing can help your nervous system