Menu
BOSH! is about two roomates who went vegan and told the world about it (and made dinner at Emirates Airline Festival of Literature). 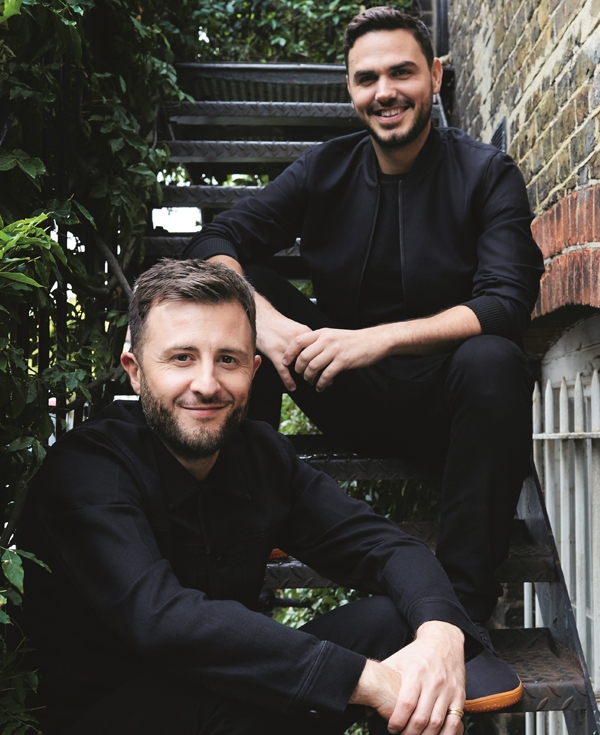 Henry Firth and Ian Theasby look, well, happy. Not in any self-satisfied way, but as the pair otherwise known as BOSH! relax on a beautiful Dubai day in February, there’s a definite sense that life is good for the English duo dubbed the “vegan Jamie Olivers.” Their online cookery videos under the BOSH! moniker attract a staggering 26 million views a month. Their first cookbook is now in 250,000 kitchens – the bestselling vegan cookbook ever – and they now have a television show, Living on the Veg. They are, to use current parlance, the ultimate vegan influencers.

Later on this day, they will cook a vegan supper for an audience at the Emirates Airline Festival of Literature. “Tell you what,” beams Theasby. “It’s great being vegan in the UAE.”

So far on their trip they’ve tried any number of Levantine offerings, some glorious hummus and an okra curry in the desert. Right now they are raving about their meal at Folia at the Four Seasons Resort Dubai at Jumeirah Beach.

“The muhammara at Matthew Kenney’s restaurant was great,” says Firth. “You just know, wherever you go, that the vegan option will be good.”

Which is interesting, because Firth and Theasby’s real success hasn’t been to encourage people to eat vegan when they go out, but to adopt a vegan lifestyle at home.

“The whole idea was to build a resource via social media for people to learn how to cook vegan food for themselves,” explains Firth. “To maybe change the conversation around veganism to a cool thing people could dabble in rather than being a militant battle. And to emphasise that you don’t have to try and find niche vegan products like sausages and burgers on the supermarket shelves; you can make this stuff perfectly easily yourself.”

That was 2016. Four years, four books and a frankly ridiculous 1.5 billion views later, BOSH! Is a brand and Firth and Theasby are bone-fide stars. And yet when they first started, they had no professional cooking experience and just filmed simple recipes from above. Their hands were in shot but it took until they reached a million followers on Facebook for the boys to reveal themselves to the public.

“We had an idea what BOSH! would be, but we didn’t plan to be the faces of it,” laughs Firth. “It’s been odd, but a lot of fun. We were mates who lived together and we knew we could both cook. We trained ourselves. And very simply, we wrote recipes. We needed to do 20 for our first batch, so we looked at what was going viral on cooking channels, what would give us the best chance of getting one million views, what crazy ideas could we come up with.

“I admit, the plates didn’t all taste great… but they looked good.”

Now they’ve married style and substance. Their ultimate chilli is one of the most popular, with mushroom mince, beans, marmite, maple syrup and dark chocolate all adding depth and flavor. And while they take real pride in making people feel healthy, they admit that sometimes it’s just nice to have a good, hearty meal.

For those just starting out on “this whole vegan journey,” Theasby advises taking it  at your own pace.

“I trialled it over a month where I gradually cut out meat, then fish, then eggs,” says Theasby. “Henry was a lot more abrupt; cold turkey, so to speak, after one night. ‘Bang, I’m vegan!’

“The advice I always give though is not to beat yourself up if you really fancy an omelette. Doing something is better than doing nothing. The more you do it though, the more you’ll get to the place you want to be.”

And some of the benefits might be as much mental as physical. Just as the subtitle of their book How to Live Vegan is “save the planet and feel amazing”, the pair manage to do a good job of balancing the personal and the global.

“I think we should be having these conversations more,” says Firth. “About our carbon footprint, the food we eat, the companies we buy stuff from, how much travel we do… and we’re cognizant of that last one ourselves, sitting in Dubai. So there’s plenty to think about and no one person has the exact right answer. But it’s true that going plant-based is something we can all do, because we do eat three meals a day, every day. And each time you do that, it’s a chance to adjust your carbon footprint.”

And with that, they’re off to prepare for their Festival dinner, which is sold out. “It’s an honour and privilege to provide food for people and we treat that with great respect,” says Theasby. “Take our book How To Live Vegan; it’s a guide to a whole lifestyle, not just telling people what to have for their tea and we feel that responsibility keenly. We’re mission-led.”

That mission – evangelical about veganism without ever being pushy –  is just about as enticing as their vegan lasagne. BOSH! living on the veg, indeed.

Coronavirus isn’t keeping people away from the gym