Menu
Arab vegans are bullied about their choices, but Bassem Youssef is part of a new wave of celebrity trying to change all that. 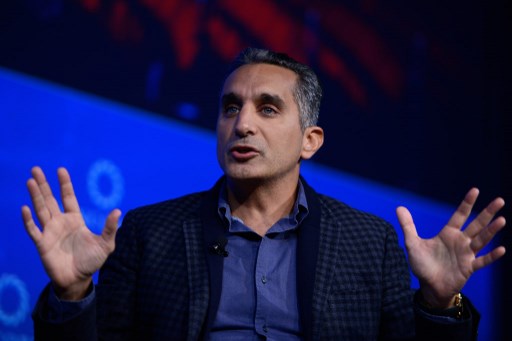 If there is one thing an Arab vegan in the Middle East dreads, it’s food-related gatherings. Often whenever someone announces “Ana Nabati,” or “I am vegan,” it is followed by dismissals, heated debates on religion and traditions, and pushy interventions.

Typical responses go something like this: “Then just have some chicken. No? Then some fish? No? Then just move the meat aside and eat the rice below it!”

Bassem Youssef, the Egyptian political satirist and TV personality, captures the dilemma of being vegan only too well in an Arabic video on Youtube titled Lunch with a Vegan — the first episode of his new Youtube show, Plant B, which explores how diet can radically improve your health. Released on May 6 and subtitled in English, it has already clocked in at more than 1.5 million views, generating a vigorous debate online.

The video captures how energetically Arab vegans are bullied over their choice to be plant-based, and addresses a wide misunderstanding about the impact of eating habits on health. Some of the featured characters on the first episode even seem to prefer fixes like fat freezing or sleeve gastrectomy, a type of weight-loss surgery, over simply changing their eating habits.

Youssef, who became a vegan five years ago, was also a surgeon for over 13 years. Best known as the “Jon Stewart of the Arab World” for being the host of the popular Cairo-based satire program AlBernameg, Egyptian authorities forced him to flee the country in 2014 because of jokes he told about the government on his show. Now living in Los Angeles, he is re-inventing himself and relaunching his comedy career. A mix of comedy and America’s Dr Mehmet Oz,, Youssef’s program references the serious health issues facing the Middle East, including high rates of diabetes, heart diseases, autoimmune disorders and even erectile dysfunction. Besides flagging the issues, Youssef encourages viewers, offering them a list of all the things they can eat when they go plant-based — besides lettuce.

“It is tough, but try it,” he says. “Try something different. You tried everything else.”

I’ve been a vegetarian pretty much most of my entire life, even as a child avoiding animal products. More recently, after finding out about the horrors of the dairy industry, I became a vegan. Youssef’s new show echoes my own personal struggles when attending gatherings of family and friends, especially iftars in Ramadan. Each meal somehow turns into a lengthy debate of “our right as humans” and how animals were created for our pleasure and consumption. I usually just avoid even entering debates and munch away on my quinoa. Besides the health benefits, I am a vegan mainly for ethical reasons, including my love of animals and nature.

It has been a long and lonely struggle. During my high school years in Jeddah, I was the only one in my class who was vegetarian and was often made fun of for it. But now, more and more Arabs are embracing plant-based diets and becoming vegan, including some of the region’s more famous faces.

One of the most vocal and powerful vegan figures is Saudi Arabia’s Prince Khaled bin Alwaleed bin Talal, who is also an animal welfare advocate and philanthropist. On Twitter he identifies himself as “green & plant-based living, proud geek and animal lover” and he regularly speaks out on the topic.

“Please choose compassion over taste,” he told an audience at the CEO Middle East Awards in Dubai last year.

Describing meat, fish and dairy as “the root of all evil,” he urged the audience to consider their impact. “We are all responsible for ending needless and unimaginable suffering that animals go through that directly affects our health and the world we live. Just remember one thing: peace starts at the table.”

An investor like his father, Prince Al-Waleed bin Talal, the prince has turned his attention to technology, green energy, and animal rights. He is a driving force behind the switch to LED lights and solar panels. After opening the Plant Cafe in Bahrain, he is planning to open as many as 30 vegan restaurants across the Middle East. There talks underway for outlets and conceptual menus in Dubai, Jeddah and Amman as well as at Four Seasons hotels in the region.

Another popular Saudi vegan is Ahmad AlShugairi. The TV and media personality, with more than 18 million followers on Twitter is best known for his television program Khawatir that aired in Ramadan from 2005 until 2015. It targeted youth and explored social issues and teachings of Islam.

“What you eat changes your temperament and mood,” he told an audience during a recent appearance at the Emirates Airlines Festival of Literature in Dubai. “I changed when I changed my diet. I became calmer, felt light in my body and mood.”

One of the region’s oldest advocates for veganism, 82-year-old Mariam Nour, is a Lebanese television personality who has hosted radio and tv shows including Sahtak fe Sahnak (Your Health in Your Plate). She lived in the United States, where she studied under the spiritual guru Osho and author and Michio Kushi, an influential figure in the macrobiotic community. Nour was among the first to bring new-age ideas to Lebanon in the late 1990s, and she was often ridiculed for it.

“In order to have a peaceful mind, one must have a peaceful and healthy body,” is a famous often repeated quote by Nour. “Let food be your medicine and use meditation as a way to help clean both body and mind.”

She is famous for designing dishes with “healing” superfood ingredients for famous figures, including Mother Teresa and members of the Saudi royal household. She also opened Beit al-Nour, or House of Light, a center where people can consult her for the treatment of a variety of medical conditions.The world of Arab celebrity still has a long way to go, however, before catching up to the way North American celebrities talk about their healthy food choices.

I personally have met Arab female celebrities who told me privately they are vegetarian and vegan, but still aren’t public about it. No doubt they just don’t need the headache that comes with having to defend their choices.

Nancy Ajram, the Lebanese singer, may have talked about avoiding animal products and choosing more plant-based dishes, but she still hasn’t aligned herself strongly with the cause.

Youssef and the others may seem to be modern trailblazers, but veganism does have interesting roots in the region’s history.

Abu Al Ala Al Ma’arri, the famous 11th-century blind Arab philosopher, poet and writer was a committed vegan. One of my favorites, he opposed all forms of violence, and his poems on respecting nature have been making the rounds on social media for years. They are often cited by animal rights groups — ironically, those located outside the Middle East. As he wrote so long ago: “Do not unjustly eat fish the water has given up / And do not desire as food the flesh of slaughtered animals / Or the white milk of mothers who intended its pure draught for their young, not noble ladies / And do not grieve the unsuspecting birds by taking eggs; for injustice is the worst of crimes.”

Meet the Emirati cyclist racing to the 2020 Summer Paralympic Games

A yoga teacher needs more than 200 hours of training