Menu
Swiftly becoming one of the world’s most interesting book festivals, the 12th edition of the Emirates Airline Festival Of Literature also has strong health, mindfulness, food and environmental strands. Among 185 writers from 37 countries are vegan chefs cooking up a storm on YouTube, Buddhist monks discussing happiness and a host of other appearances devoted to mind and body, too.  Delna Prakashan and Rachael Lynn Moving to a completely new country to live and work... 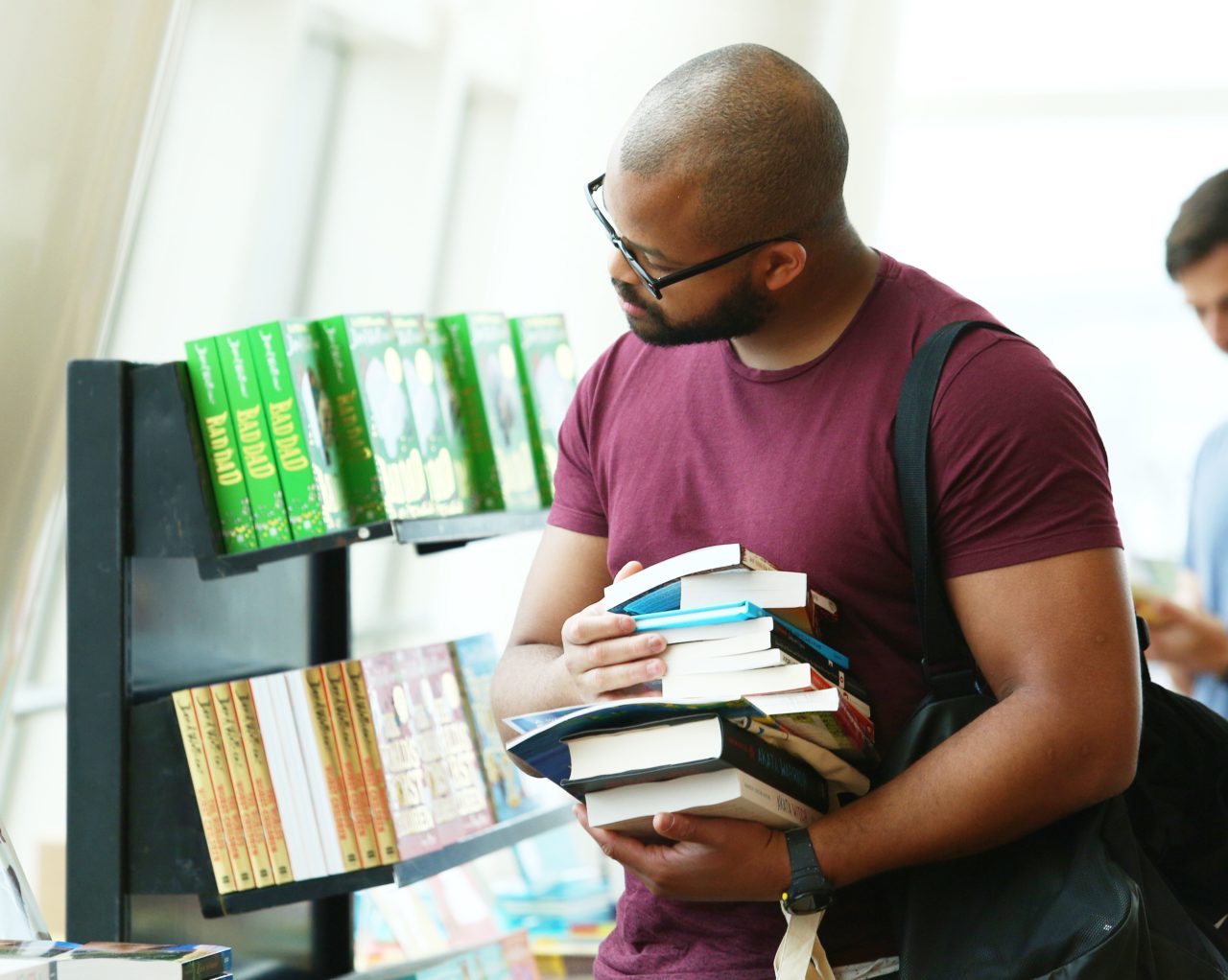 Swiftly becoming one of the world’s most interesting book festivals, the 12th edition of the Emirates Airline Festival Of Literature also has strong health, mindfulness, food and environmental strands. Among 185 writers from 37 countries are vegan chefs cooking up a storm on YouTube, Buddhist monks discussing happiness and a host of other appearances devoted to mind and body, too.

Moving to a completely new country to live and work is exciting, but also emotionally draining. Two debut authors from UAE publishing house The Dreamwork Collective approach how to relocate happily by discussing their new books. Delna Prakashan’s Whip It: A Guide to Getting Sassy and Skilled in the Kitchen is a “survival guide for the busy kitchen-phobic girl” – a cookbook that’s as much about looking after yourself in the chaos of the fast-food, fast-living city. Rachael Lynn, meanwhile, explores the difficulties she found leaving Toronto for Dubai in At Home Anywhere, which is full of strategies to survive the upheaval of huge personal change.

You might remember English television presenter Kate Humble for her wonderful documentary series, The Frankincense Trail, where she made an epic journey across the Middle East to explore the routes that first connected the Arab world with the West. Her latest venture is a journey of a slower kind; Humble’s current book Thinking on My Feet celebrates how health and happiness can be achieved just by putting one foot in front of the other. Whether she walks for pleasure, personal challenge, to recharge her batteries or for therapy, Humble finds the benefits that only a journey on foot can offer.

When Nadiya Hussain won The Great British Bake Off in 2015, it was genuinely one of the most emotional pieces of television of the decade. “I’m never gonna put boundaries on myself ever again,” she said in her acceptance speech. “I’m never gonna say I can’t do it. I’m never gonna say ‘maybe.’ I’m never gonna say, ‘I don’t think I can.’ I can and I will.” And she was right; this 35 year-old mother-of-three –  a “mamma and maker” – is now a television presenter, columnist, author and thinker. In Finding My Voice, Hussain questions the barriers women, no matter who they are or where they live, have to cross, all with her trademark warmth and honesty.

Nearly 30 years ago Gelong Thubten ditched his stressful acting career to join a monastery and become a Buddhist monk. It was the right decision, as much for him as for everyone he has encountered since. His teachings in schools, universities, businesses and on film sets (he has worked with actors Benedict Cumberbatch and Tilda Swinton) around the globe have made him something of a world-leading expert in mindfulness meditation. Here, he talks about his latest bestselling book A Monk’s Guide To Happiness, which refreshingly argues that we’re still hard-wired to be happy despite the stresses of the 21st century. It’s his first solo effort after a 2018 collaboration with neuroscientist Ash Ranpura and actress, writer and comedienne Ruby Wax, How to be Human.

Ikigai is a Japanese philosophy which focuses on “the thing you live for.” Apprentice Asia winner Jonathan Yabut has applied that concept to building a career that matches your passions, and at the festival he will share his methods to finding your ikigai. Whether at work or at home, Yabut’s driving force is harnessing passion, vocation, mission and profession. As his website puts it so brilliantly, Yabut is also “Asia’s worldwidest motivational and marketing speaker,” and at the festival he will also hold masterclasses on boosting confidence and work productivity and talk about his memoir From Grit to Great.

Vegans are not only spoiled for choice in UAE cafes and restaurants, but increasingly in hotels too. But how to live a satisfying vegan life at home? YouTubers Henry Firth and Ian Theasby have taken the vegan community by storm with their video recipes as BOSH!, which spiralled out into bestselling cookbooks with a very Jamie Oliver-esque approach to bashing out tasty vegan meals. Neither of them is a professionally-trained cook, which in this instance actually helps. How To Live Vegan in particular is a pleasingly straightforward, no-holds-barred guide to plant-based living. There will also be the chance to enjoy a three-course vegan meal yourself.

Five Fun Ways to Save the World!

Firth and Theasby also appear in this family-friendly and entertaining look at a very serious subject; how we protect or indeed save the environment in the decades to come. BOSH’s new book on veganism, after all, is keen to tell people how to “save the planet and feel amazing.” They are joined by Martin Kiszko, who also wants to save the planet, but in his case through the power of poetry in his books Poems for a Blue Planet and Verse for the Earth. Another poet, Harry Baker, collaborates with Chris Read as they offer hopeful songs about the planet’s future as “the nation’s favourite comedy rap-jazz duo.” Fans of Flight of The Conchords will love their act. Finally, Australian children’s author Jeannie Baker talks about how her books take on environmental thrashes and presents her short film Where The Forest Meets The Sea.

The Green Sheikh is the apt moniker for Sheikh Abdul Aziz Al Nuaimi, a member of the Ajman royal family in the UAE who over the past 25 years has been a vocal campaigner for the environment, as well as other social issues in the region. And while it’s sad that the problems he highlighted at the start of this century are now part of a full-blown climate crisis, the Green Sheikh’s point is that it’s our immediate communities which hold the key to preserving our environment. In this session he will discuss how to adopt a sustainable, respectful and ultimately enriching lifestyle.

Chika Jeune was three days old when Haiti was decimated by an earthquake in 2010. Then her mother died giving birth to her brother and Chika was taken to an orphanage  run by author and screenwriter Mitch Albom and his wife in Port-au-Prince. Even worse was to come; Chika was diagnosed with a brain tumour and Albom was impelled to bring Chika into his family to try and find a cure somewhere in the world. Finding Chika is the poignant story of “a little girl, an earthquake and the making of a family” that has much to teach us about the messy glory of families and, well, life.

You are what you project; it’s estimated that body language has an overwhelming impact on the relationships you build both in work and at home. Psychologist Mohammed Eisa Al Hammadi from the General Department of Forensic Science & Criminology and Mohammed Sulaiman Al Dhawyani, the Head of Forensic Psychology in Dubai Police, will explore the common language of gesture and body movements in this Arabic workshop and also underline the importance of understanding how other peoples and cultures express emotions.

It’s become one of the buzz phrases in business in recent years. Emotional intelligence – awareness of your actions and feelings and how they affect the decisions you make in the workplace – has become key to effective leadership. Emirati writer and trainer Khalifa Almherzi certainly believes it is crucial to success on any rung of the career ladder and in this workshop in Arabic, Almherzi will also zero in on how to develop communication and people skills and how they can have an impact on every area of life.