Menu
A rugby injury left special needs teacher Mike Ballard paralyzed from the waist down. But despite being the "wrong shape," he is now aiming for the Olympics, this time as a kayaker. 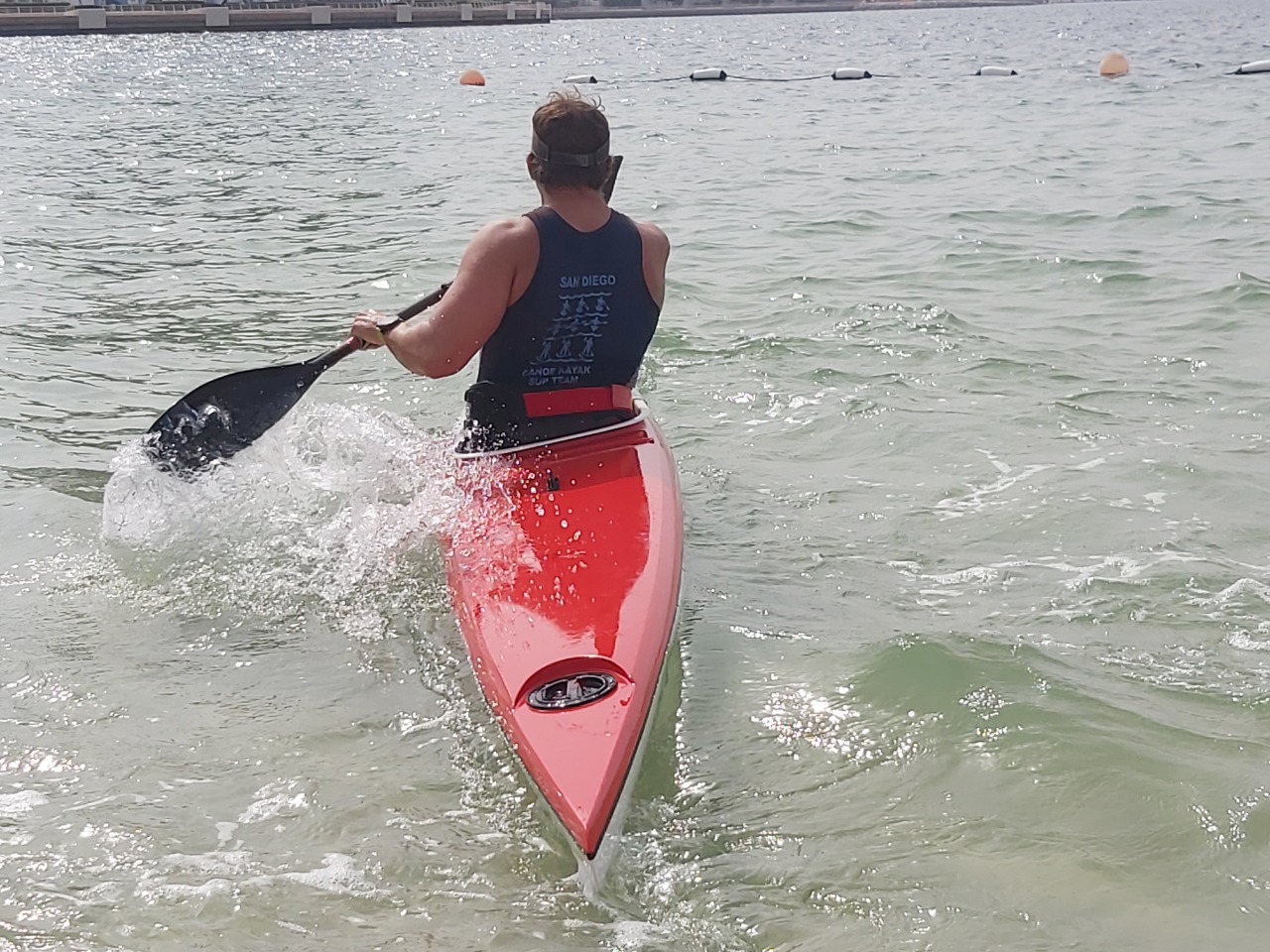 Mike Ballard is on the hunt for the perfect seat for his kayak and he needs it well before May, when he is due to compete in the World Championships in Hungary. Why does it need to be special? Because 34-year-old Mike is paralyzed from the waist down.

As he is the first to admit, his burly, muscular physique is not ideal for the sport.

“For kayaking you need long, skinny arms,” he says. “I’ve got short, stubby arms. If you look at the top guys in the sport, they’re all skinny so it would be beneficial to me to lose some weight in the next three months.”

Whereas able-bodied kayakers use their legs to steady themselves in the kayak, Mike can’t do that and has to wedge himself in with foam – but not too much of it.

“The issue is that if you go over, you have to be able to get out of the kayak fast,” he explains.

Nor can he steer with his feet; he has to do it by leaning and using his arms. Creating the right seat is the big challenge and he has “a nice crew of engineers” at a workshop in Al Zeina working on it and experimenting with foam, fibreglass and carbon fibre.

Mike, who hails from Michigan in the northern US, has always been sporty, but he was not always a competitive kayaker. He arrived in Abu Dhabi in 2011 to take up a job as a special needs teacher, working with children and young adults with autism. At weekends he played rugby for the Abu Dhabi Harlequins and also took people on kayaking tours around Abu Dhabi’s mangroves.

The world changed for him in April 2014. He was playing in an important rugby match, the West Asia  Cup final against the Dubai Dragons. Thirty minutes into the game, Mike went in for a tackle and ended up at the bottom of a heap with two other players on top of him. When the dust cleared, he knew instantly that he was in serious trouble.

“Everybody knew it,” he recalls. “I wasn’t one to to spend a lot of time on the ground, so when I didn’t get up, it was very clear to me and to outsiders that it was serious. By the time the trainer got out on the pitch and even before I was put on a stretcher, we both knew I was paralyzed.”

They were right: Mike’s T12 vertebra was broken, leaving him paralyzed from the waist down.

He coped, he says, by calling on his eight years of experience as a special needs teacher and what he calls “an element of bravado.” The watching crowd included all his friends and his mother, who was visiting from the US and had come to watch him play for the first time.

“When they carted me off I gave a big thumbs-up so everyone could see, even though I knew what was going on. The next week with everyone from work and from rugby coming to see me, I was the most popular guy in the hospital, so there was an element of bravado or machismo.

“At the same time I’m a special education teacher with two master’s degrees in behavior and disability management. I’d had a lot of preparation in the previous eight years. My job was to put in adaptations and modifications. I spoke the language. I had thought about that scenario. You can’t play rugby and see people snapping their legs and not think about it.”

After a week in hospital in the UAE, Mike was flown to a clinic specializing in spinal injuries in the US, which happened to be only a few hours away from his childhood home in Michigan. Over the next months he had extensive surgery on his spine, followed by intensive rehabilitation in hospital and then as an outpatient.

By July, he was back home and contemplating his future.

From earliest childhood, sport had been a huge part of his life.

“It’s a Ballard family story that the first word I said was ‘ball’,” he jokes. At school he played baseball, American football and was on the wrestling team. Michigan gets a lot of snow, so winters were filled with skiing.

But as he recovered, he knew he wanted to return to Abu Dhabi.

“Michigan is wonderful but it snows and rains. Abu Dhabi was a known, good thing to me,” he says. “The job was good, the pay was good, the social life was good, but I needed to find out if it was wheelchair-accessible.”

In December 2014, eight months after his injury, he returned to the UAE for a two-week visit to watch the Dubai 7s rugby tournament. “And I saw that as long as you don’t go downtown, you’ve got it made,” he says. Just under two years after his accident, he came back for good.

But he also knew he wanted – and needed – to stay involved in sport in some way.

“It wasn’t just something in the back of my mind, I knew it was going to happen,” he says. “I’d seen the Special Olympics and I knew the next Paralympics were 24 months away.”

But which sport? He researched “pretty much every sport there is” to see what he might be good at and his physique seemed to point to weight lifting. He even had a meeting with the US Paralympic Committee. But in the end, he was drawn back to kayaking.

“I grew up on a lake and spent a lot of time in the water, swimming and kayaking. In Abu Dhabi I did kayaking tours. It was a pretty big staple in my life. And if I was going to commit to something for the next eight years, it might as well be something I could do on a beach.”

The aim now is to go to the World Championships in Hungary in May, qualify for the Tokyo Paralympics in August (deferred from last year because of Covid-19) and then the Paris Games in 2024.

Looking back on what he has dealt with, he is astonishingly matter-of-fact about what happened to him.

“It’s not like you have a choice,” he says. “There’s nothing you can do about it. You can’t write a strongly-worded letter to anyone. It completely scrambles whatever you had planned and whatever you thought was a big deal. It scrambles your priorities. After a couple of days in hospital, it occurred to me that I hadn’t been to the bathroom in 72 hours. Then I looked down and saw a catheter and I thought, ‘OK, we’ll deal with that later.’ ”

He even says he would be better as an athlete if he didn’t have legs at all.

“If I want to be successful, being an amputee is a good way to go, as it gives you more muscle function for what you do have. My legs do me no good at all. Really, I’m in the wrong sport.”

But what about other people’s attitude toward him? What is the wrong way to act around a person who is in a wheelchair?

“People get awkward because they’ve never been in that situation. It’s fine, just be cool. When in doubt, don’t ask about the injury. If we’re in an elevator, it’s okay for a child to ask, but not a 50-year-old man. What version of this story could I give you in five seconds?

“And any time you’re providing a service, just ask. Is it okay to push you up this ramp? Can I get the door for you? What an able-bodied person sees as a challenge is a challenge I deal with 20 times a day. If I’m getting into or out of my car and you’ve never seen a person in a wheelchair doing that, it doesn’t mean that person wants you to pick up the chair and jam it into the car. So just ask! And don’t touch my chair! Unless you’re wheelchair certified, that is.”

While the Covid pandemic has left many feeling depressed and lethargic, it has had the opposite effect on Mike.

“Covid has been awesome for me,” he says. “Pushing back the Olympics gave me an extra year to train. Going into lockdown with the beaches closed was tough, but overall it’s been great, because I was able to maximize the situation I’m in. I am a different paddler now to what I was 12 months ago.”

He is a brand ambassador for Well Emirates and feels lucky to have their sponsorship.

“Kayaking is a very obscure sport,” he explains. “And it’s expensive. Anything you do on the water is expensive – it’s all pro-grade this, Olympic-grade that. Nike haven’t called, but sponsors will come. I’ve got all the confidence in the world.”

As well as his regular training, he is exploring adding yoga and meditation to his regime. “In the world of behavioral analysis they are recognizing yoga as a treatment and I’m inclined to be in that camp.”

Many people get their ideas about what life after a devastating injury is like from films; it usually boils down everything the character has lost to one moment when they are forced to realize their life will never be the same again. Mike says there have been so many moments like that, and they continue and they include some things – like what’s  involved in using the toilet – that no one wants to know about.

“I will say this – I hate watching movies about spinal cord injuries.”

As for his prospects of winning a medal, Mike is realistic about his chances.

“This is not a Disney movie,” he says. “I hope we’re in the finals. But we’re going to make a run at it and head straight into the teeth of it. ”

First, though, he’s got to get that seat right.

Mike Ballard was a guest on the Livehealthy podcast on March 17.

Vaccinating the world’s poor is key to ending Covid-19