Menu
TikTok is booming in the UAE and if you haven’t already taken a deep dive into it, there are a few things to know before you get started. • There has also been a major growth in fitness, sports and wellness content. In the first half of 2020, there was a 270 percent increase in related content under #fitness hashtag, surpassing 1 billion local views.  • The demographic is getting older, particularly after all those... 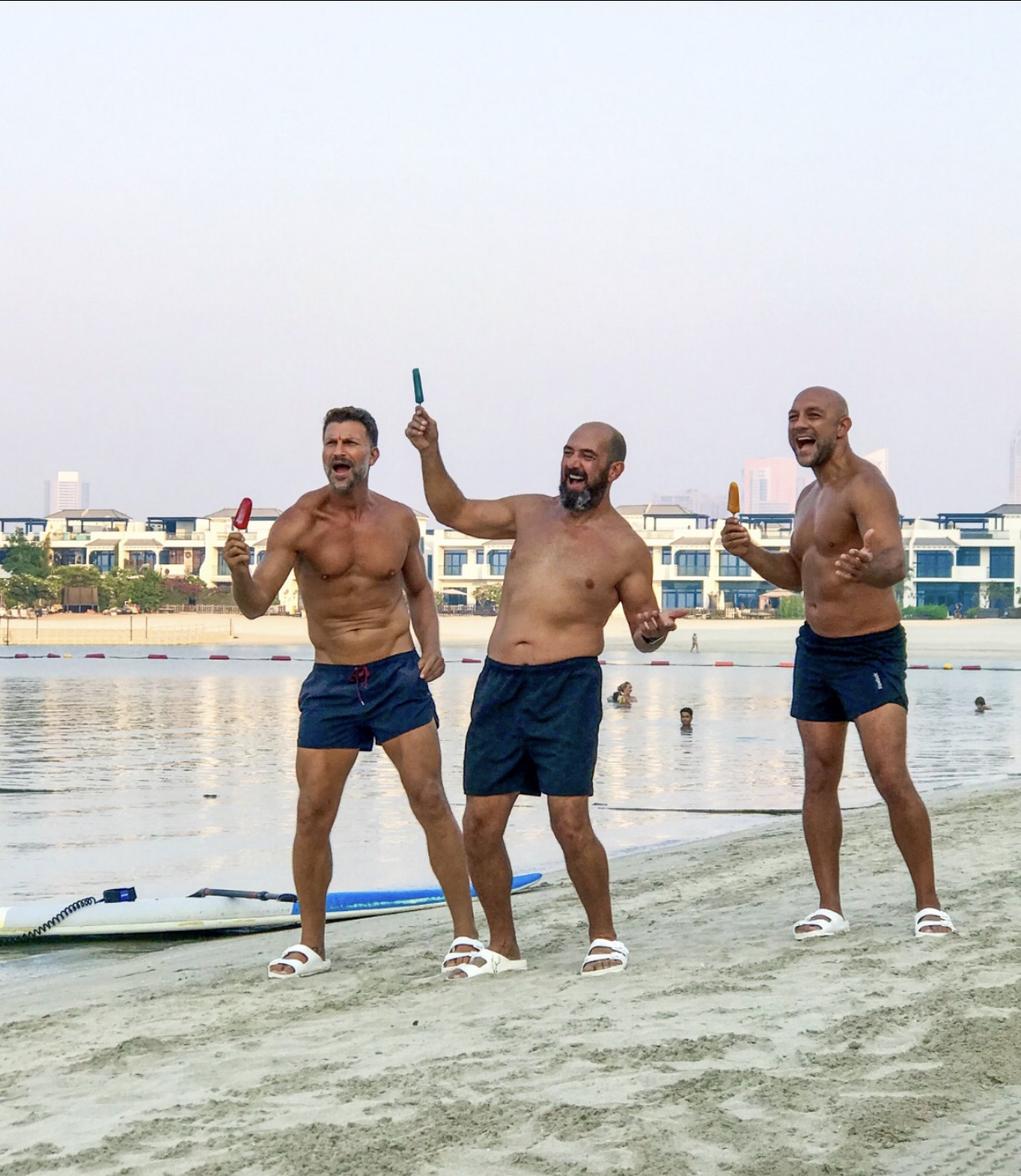 From left: Aydin Momtaz, James Groves, and Guillame Guillame Mariole filming a video for TikTok outside Ignite Surface (Watersports) on the Palm Jumeirah.

TikTok is booming in the UAE and if you haven’t already taken a deep dive into it, there are a few things to know before you get started.

• There has also been a major growth in fitness, sports and wellness content. In the first half of 2020, there was a 270 percent increase in related content under #fitness hashtag, surpassing 1 billion local views.

• The demographic is getting older, particularly after all those weeks in lockdown. There are plenty of fit and happy people in their 40s, 50s and beyond producing content.

• It’s not all about dancing. There are tons of entertaining challenges that incorporate fitness, like #balanceshow (126.7m views globally) or #my_move (174.2m views globally) as well as confessionals, tutorials, comedians, complainers and lots of people detailing how they keep fit and sane, in and out of quarantine.

• Along with hashtags, brevity is everything: there is a 60-second limit on videos and the endless supply means you need to get your topic across in a few seconds or risk being scrolled over.

• TikTok works differently from other platforms: people can amass huge audiences with very little content, or get hundreds of thousands of views for a piece of content with barely any followers.

• Football is the most popular sport on TikTok in MENA. The Dubai based club Al Jazira FC has become the third biggest football club account in the MENA region with 86.9k followers and 23.3m views of #AlJazira since the team joined TikTok in March 2020.

However individuals and groups have been making their mark too. We track a few to follow:

The CEO of Ignite, Guillaume Mariole, got the idea to make the first TikTok video when he and two friends just started dancing while packing up water sports gear outside Ignite Surface (Watersports) on Palm Jumeirah.

“When we posted it, people were saying wow you’ve made my day, I’ve had such a bad day,” says Mariole. “I said ‘Guys, let’s keep doing it – we’re making people laugh’.”

The other two dancers are Aydin Momtaz – he might look familiar  as he’s a successful model in the region – and James Groves, who builds boats. All three are in their 40s.

Rentals at Ignite tend to spike every time a video goes up. And there’s been a more personal development, too: it has given Mariole a way to connect more with this six-year-old daughter, Belle.

“When we do a funny TikTok, at least I ‘m dancing with her, I’ve got something in common with her,” he says. “Which I think is really hard for dads.”

A CrossFit level 2 coach, Abeer Al Khaja, aka Abeer MK, also helped to start the Ana Gow (I am strong) Running Club to help other Emirati women feel more comfortable about running. As she told The National in 2018: “I’m going to make sure that people hear of Emirati women athletes, even if it takes me five to 10 years to make this happen.” Legless rope climbs; snow runs and burpees with a weighted vest? She does them all.

With 782.4K followers, braided Emirati Fitness First brand ambassador Walid Yari is a warrior. In one of his most recent videos, he lifts weights and pulls a Ford F150 with a rope. There’s lots of fitness content, playful videos (Yari jumping onto his couch for a nap) and a few using TikTok’s camera tricks, too.

If you want workout ideas, then Peter Barron is your man. The Irish Dubai-based fitness trainer, a giant on Instagram, is just getting started on TikTok but he is already pulling in the views. He posts regular workouts of the day that can be done at home, interspersed with challenges, quirky offerings and some seriously tempting cheat-day food.

The UAE’s first professional wakeboarder, Omeir Saeed, has 284.4K fans on his TikTok account and for good reason. Whether the Abu Dhabi-based athlete is cruising around the Burj Al Arab on his electric surfboard or tumbling through the air on his wakeboard at his club Al Forsan in the capital, it’s pure entertainment. Saeed told Esquire Middle East that he started out snowboarding in Dubai, then taught himself to wakeboard mostly from YouTube videos. He entered his first competition just two months into the sport and after coming second, he decided to get serious about it.

Fahed Albreiki has been practicing freestyle football since he was 16, when he gave up a professional career with national club team Al Ain FC to pursue it full-time. He won the UAE Freestyle Football Championship, earning a spot in the Red Bull Street Style World Final. “I really try to connect my freestyle with my own character and individuality,” he told Redbull.com in 2018. “And it’s always a goal for me to show something that people have never seen before.” He’s got 20.9K followers on TikTok, where he regularly earns hundreds of thousands of views for highly entertaining – and mind-boggling – videos.

Ammar Al Hajjaji, aka Ammar Freeze, a semi-finalist on season 2 of Arabs Got Talent and a regional champion, is another one to watch. He has 56.2K followers and is unbelievably adept at ball-handling with his head and shoulders, his speciality. As you can see, he’s adept at Tik Tok tricks, too.

Danae Mercer, a Dubai journalist and body acceptance influencer, has earned international recognition by shooting to almost 2 million followers. (She is also a livehealthy.ae columnist and new member of our expert panel). On TikTok she offers more get-real videos that show how her own body bends and folds and exposes the tips, tricks and angles that influencers use to get a perfect shot – a welcome tonic when the perfection pressure gets to be all too much. She’s using the platform and her other social media channels to point out the darker side of TikTok, too, reporting when her less-flattering videos are taken down while thinspo, with its heavily filtered and disturbingly diet-focused content, is allowed to flourish.

Have you any suggestions for additions to our list? Leave a comment or send us an email.

The psychological impact of Alzheimer's disease