Menu
Every night during Britain’s first lockdown, chef Joudie Kalla’s phone would ring at exactly 7pm. The friend on the other end would not need to say a word. Instead, she would sit watching on FaceTime as Kalla forced down mouthful after mouthful, or they would eat together in companionable silence, or she would tell Kalla anecdotes about her day, before ringing off and repeating the whole process the following evening. The kind gesture helped Palestinian... 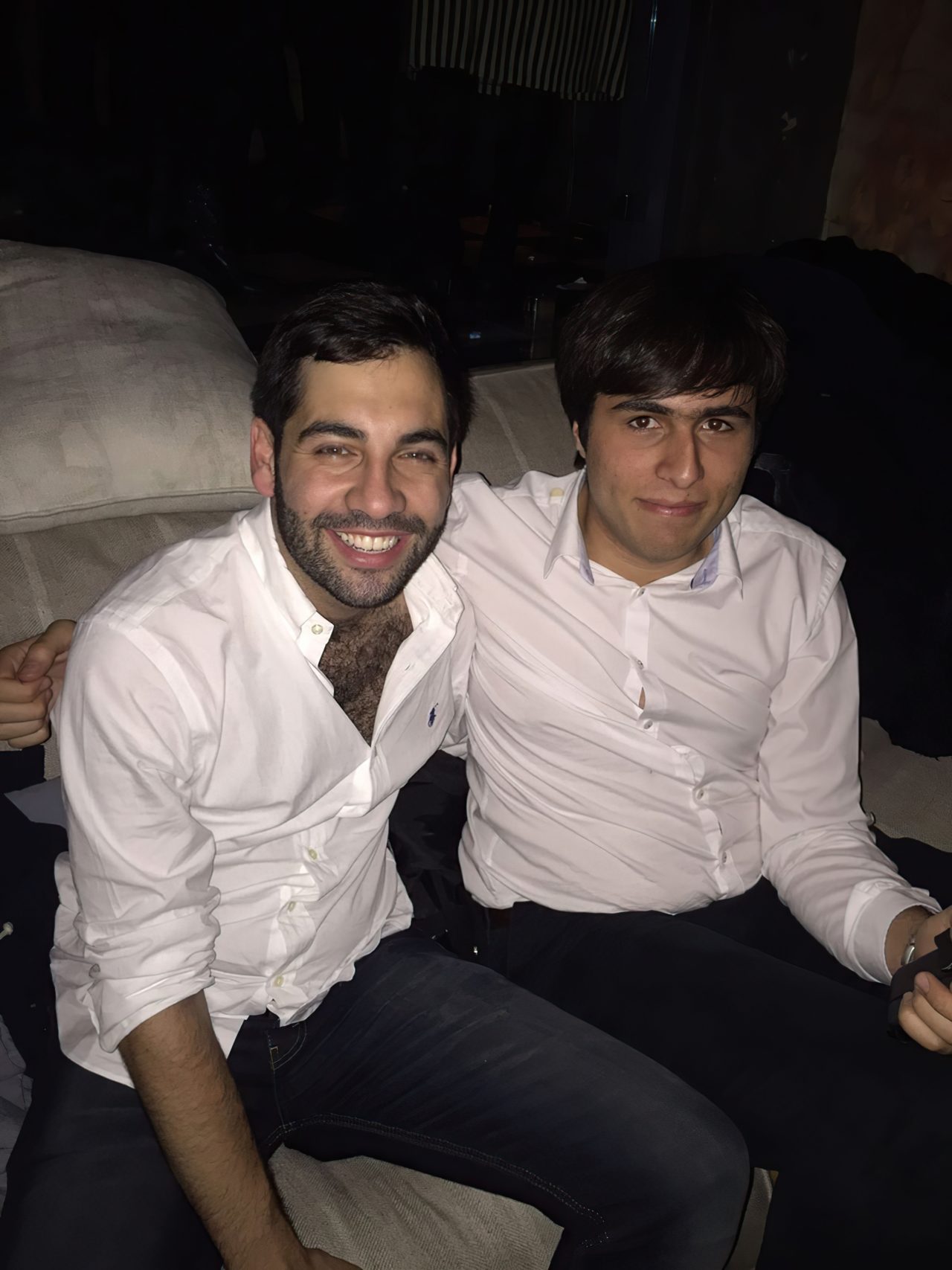 Razzak Mirjan and Beder Mirjan/Image courtesy Razzak Mirjan
Every night during Britain’s first lockdown, chef Joudie Kalla’s phone would ring at exactly 7pm.
The friend on the other end would not need to say a word. Instead, she would sit watching on FaceTime as Kalla forced down mouthful after mouthful, or they would eat together in companionable silence, or she would tell Kalla anecdotes about her day, before ringing off and repeating the whole process the following evening.
The kind gesture helped Palestinian restauranteur and cookbook author Kalla regain her appetite after being stricken with anxiety by the rigors of the coronavirus pandemic. Having just recovered from a four-month bout of pneumonia, and deprived of seeing family members scattered around the world, the author of Palestine on a Plate spiralled into depression. Struggling to keep any food down was one of its symptoms.

“I couldn’t eat because my throat got so tight from anxiety,” recalls Kalla, 43, who lives in London.

“I lost 7kgs during the lockdown. So my friend would eat with me, or just sit and watch me eat, even though I wasn’t speaking.
“Eventually I didn’t need her to watch me. Now she’ll call me and we will eat together, without the anxiety.”
Kalla has long had a profound understanding of the relationship between food and one’s state of mind.
As a teenager, her struggles with mental health issues led to anorexia and a number of phobias, many connected to food.
When she sank into “the most incredible depression” in her 20s, she found herself spending sleepless nights cooking for hours and craving warming spices and lentils – anything that felt “like I was being hugged from the inside.”
Kalla is an ambassador for the mental health and suicide prevention charity Beder, which is behind a new celebrity cookbook filled with wholesome recipes intended to balance both gut and mental health. Contributors include Gordon and Tana Ramsay, Yotam Ottolenghi and Atul Kochhar, as well as UAE-based Zahra Abdalla and Dalia Dogmoch Soubra, who were all invited to submit feel-good recipes and share their own experiences.

In the foreword to From Beder’s Kitchen, Kalla wrote: “I found solace in the kitchen when I couldn’t sleep or was riddled with anxiety and melancholy. I would go there to bake, cook and experiment to distract my mind from all things dark and dangerous. Cooking gave me a purpose.”

It turned out that she was far from alone. When the founder of Beder, Razzak Mirjan, first tentatively approached high-profile chefs, restauranteurs and celebrities and asked them to talk openly about their own mental health, he was overwhelmed by the honesty of their responses.
He launched the charity a year ago and named it after his step-brother Beder, who committed suicide in 2017 at the age of 18. The cookbook, self-published this month, is the charity’s latest venture after most of its fundraising activities were driven online.
Masterchef UK finalist Alex Jorge, who contributed a recipe for wild garlic gnocchi, wrote: “I have known someone who has taken their own life, which really highlighted to me how raising awareness about mental health can help people understand the struggle others might be going through. Cooking for yourself or others is a small act of kindness that goes a long way.”
Abdalla, who shared her recipe for Arabic spiced roast chicken from her blog Cooking With Zahra, wrote about her battle with depression after giving birth to her third child and being diagnosed with thyroid cancer.
“I didn’t realise it then,” she said, “but I needed to find a way out.” Cooking helped her “slowly begin to heal.”
Great British Bake Off winner David Atherton contributed a recipe for microbiome-friendly muffins, writing: “Food has the potential to cause damage to the mind and body but also has the potential to heal, sustain and nourish. The kitchen has always been a sanctuary for me. I find the act of kneading bread or shelling nuts meditative. Making food to share with others feeds a community, which in turn feeds my life.”

The connection between the gut and mental health goes as far back as the ancient Greeks, who believed that the stomach was the seat of all emotions and not the heart; indeed, the word melancholy derives from the Greek verb meaning “to go mad” but its literal translation was “to be filled with black bile.”

The ancient Egyptians, meanwhile, tossed aside the brain but preserved the intestines, liver and stomach during mummification and placed them in special canopic jars around the body, believing they had their own god, Qebhesenuef, to protect them.
In modern times, the term “comfort food” only entered the Oxford English Dictionary in 1997 but its first reference goes back to the 1960s, when the Palm Beach Post wrote of stressed and overburdened adults turning to “food associated with the security of childhood, like mother’s poached egg or famous chicken soup.”
Scientists are still making new discoveries about the relationship between our digestive system and mental health and only recently realized that the gut’s ecosystem of 100 million neurons uses more brainpower than speech, leading to it being called “the second brain.”
We talk of “trusting our gut” and of a “gut instinct” without needing to explain what that means. Butterflies in the stomach are just one example of the gut governing our physiological stress response, says Michael Gershon, author of The Second Brain. Irritable bowel syndrome is thought to be linked to stress but could also occur because of a surplus of serotonin in the intestines, according to Scientific American, which said the field of neurogastroenterology was still in its nascent stage.
Keen marathon runner Mirjan, who sometimes runs two marathons in a week, said looking after mind and body went hand in hand.
“Cooking involves a great deal of self-care because you take time out of your day to do something that invests both in yourself and others. It’s a mindful activity and an opportunity to follow some instructions and have something going to plan, which in life is quite a rare thing.”
Kalla cannot pinpoint the start of her own depression and anxiety but food has always been a marker.
At her lowest ebb as a teenager, she could stomach only boiled rice and potatoes. When she binged on crisps and cake during a recent dip, it made her feel both physically as well as mentally unwell.
“Everything starts from your gut,” she said. “This is not new. If you eat good stuff, you feel better. Having mental health in your life is a common thing. Letting go of fighting it and just accepting it as part of life and managing it, is how I cope. Now I can feel it bubbling in my stomach beforehand. It vibrates in my gut.”
Cooking, she said, helped quieten her anxious mind and focus solely on the task in hand. “Cooking is my therapy. I ate myself better. I didn’t cure my depression but I made sure it didn’t invade every waking moment.”
From Beder’s Kitchen is out now.

Tahira Yaqoob is a freelance journalist who has written for international publications including the Daily Mail, the Daily Telegraph, The Independent, the Washington Post and Maclean's in Canada. She is the former comment editor of The National.

Build your immunity at the livehealthy festival 2021 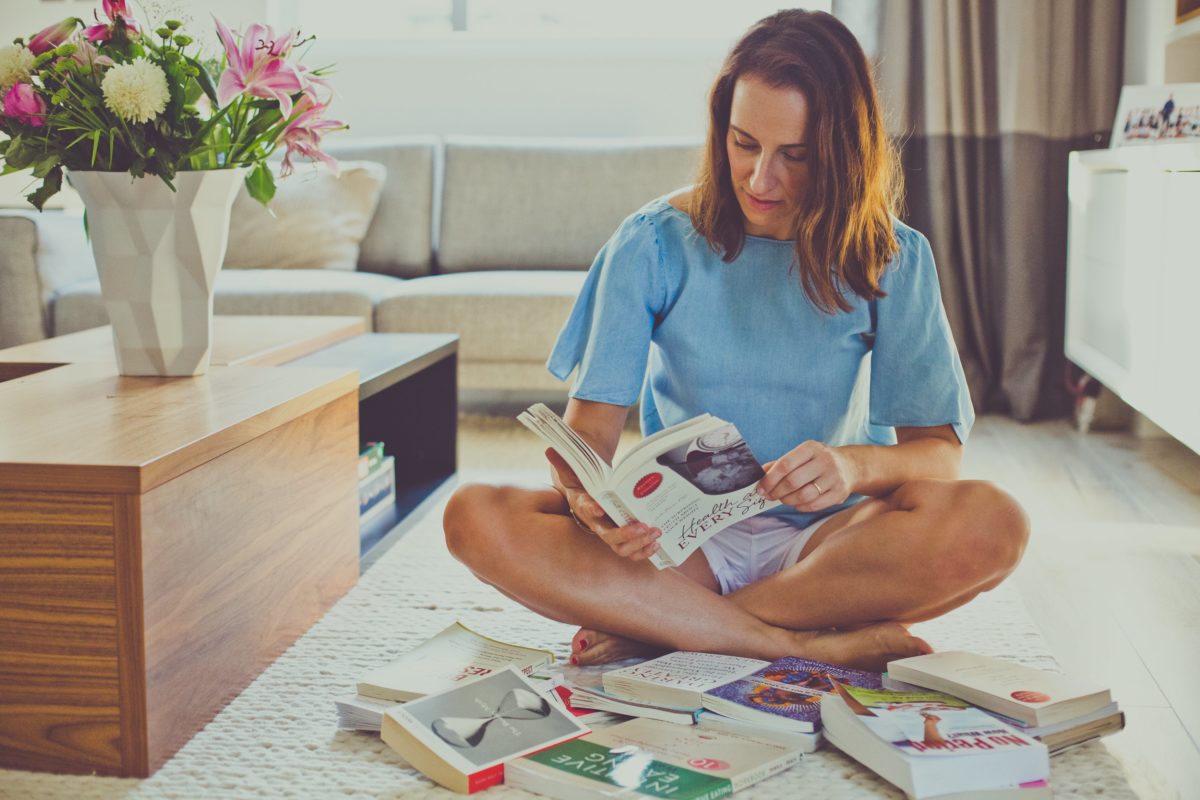